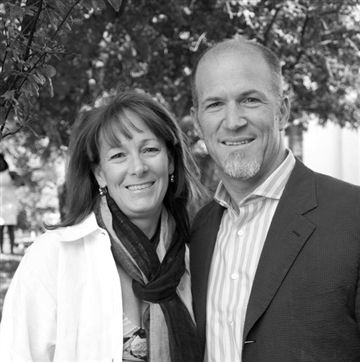 We can always count on Stephanie and Tom. They are always there when needed, always responding, always making positive things happen. They are role models for us all. They have been fully involved as members of the North Shore community at all levels and as leaders of the Parents’ Association, Benefit Board and Board of Trustees. They are parents of four “lifers” – Hayley ’10, Cassi ’12 and this year’s seniors Reese ’16 and AJ ’16.
Stephanie has been a very thoughtful and engaged parent, always there for her children—and always there for other students – offering time and attention; connecting, encouraging and caring. Her role with the School has been multi-faceted. As a member of the Parent’s Association, Stephanie’s roles have included acting as a grade parent and a steering chair. She was instrumental in moving forward our learning-differences support group for parents and has been a consistently active voice for diversity. As a Benefit Board member, Stephanie served as Auction Co-Chair numerous times—times when the success of the Auction reached unprecedented levels in terms of attendance, inclusivity and dollars raised. Fellow parent volunteer Tricia Valenti describes Stephanie’s “commitment, her focus and her attention to detail as amazing!”

Tom has done it all and somehow managed, like Stephanie, to be present as a parent, interested and invested in his children’s lives, a constant presence for their friends and other families. Tom began his 15-year tenure on the Board of Trustees in 1998 and quickly became invaluable, a true go-to person. He played a leadership role in the development of three Strategic Plans; he chaired the Finance Committee at a very critical time – a time of transition from a long-tenured Business Manager to a more strategically focused Director of Finance and during a time when the School secured tax-exempt financing to build the Conant Science Center and renovate the Lower and Middle Schools. As Board Chair from 2007 through 2011, Tom was instrumental in developing strategy that successfully led the School through the 2008 economic downturn including a focus on funding for middle-income scholarships. Not content to steer the School through an economically challenging time, Tom’s leadership steered our Development and Campaign efforts that led to unprecedented fundraising success and the completion of the $30,000,000-plus “Small School. Big Plans.” Campaign. Finally, Tom served on two Head of School Search Committees, including our current one. Clearly, as Board Chair, Tom demonstrated remarkable versatility, focus and a passionate belief in young people and the School. He was there when needed, he did what it took and he pulled others along with him.

Former Board Chair Susan Bondurant praises Tom as “smart, a quick study, able to find talent, with deep faith (personal and in this institution). ” Tom is a visionary, perceptive and responsive, and has an unusual ability to frame the issues. He sees possibilities, is analytical, strategic and decisive, and believes in leveraging our model to empower students to change the world. Former Vice Chair Jeff Colman’s perspective is “Tom always came prepared with distinct thoughts about what he felt was best for North Shore. He was and is an extremely thoughtful, farsighted force in advising Tom Doar and helping the School. He never thought of himself but only of service. I respect him and I honor him.”

Stephanie and Tom are enthusiastic Raider team parents, as fellow parent and alum Chris Charnas ’83 can attest. “They bleed purple as much as anyone else though they didn’t attend North Shore.” Never wanting or seeking the spotlight, they step up when asked whether it’s for their children or others. Stephanie’s energy is decisive, down-to-earth, practical, no nonsense, a problem-solver, and all with a terrific sense of humor.

Stephanie and Tom are generous in so many ways – and many that we don't even know—from their leadership, hours and hours of service to hosting exchange students to contributing to faculty-and-staff appreciation funds – they do so much for so many. They step up and inspire others to do as well, exemplifying our school motto, “Live and Serve.”

Presented to Stephanie and Tom Formolo by Head of School Tom Doar III
October 21, 2015
Back