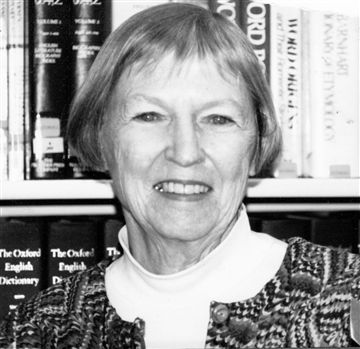 It was 54 years ago when Mary Elizabeth Price graduated from North Shore Country Day School. You might think that graduation would be the end of her ties to this school, but it as more like the beginning.
In the eight years before she returned to North Shore as Perry Dunlap Smith's secretary, I think she was really in training for anything and everything that would be thrown at her here. She was even cleared by the FBI for work on a summer secret project having to do with airplane gun sights. At Smith College, she sang and danced in a show called 'Factory Follies" and performed all over Massachusetts. The theme song of the show was, "If you buy a bond and I buy a bond, then we will have a bond between us."

So she was ready to bond again with North Shore. Since 1950, when Liz Hunt returned, she has danced gracefully and skillfully through a variety of responsibilities. Not only was she Perry Dunlap Smith's assistant, but she was also assistant to the heads of all three divisions—Lower School, Middle School and Upper School—although not all at the same time. When I was Head of Middle School, Liz's calm, her knowledge, and her wisdom were indispensable to me. So were her editorial skills.

In addition, for more than twenty years, Liz was Director of Financial Aid. She was also Registrar and assistant in College Counseling. When I asked Sharon Cooper if it was true that Liz saved her life on numerous occasions, she replied, "Oh no, constantly!" Liz has retired more than once, only to have one of us beg her to return—and she's still lending a hand in the Development Office, on the Alumni Board, and wherever she can.

Liz loves singing in a choral group but would never be one to sing her own praises. In almost a half century of service to North Shore, she has often been unnoticed—but the results of her work never are, even the little things. Imagine, for instance, a Commencement without diplomas lovingly tied with purple and white ribbons and carefully arranged in the rack. Or most recently Mac's party with the balloons forlornly deflated on the tables. It was Liz who noticed them leaking when all the decorating was done, and it was Liz who took the time to make the repairs—typical of the quiet, matter-of-fact way she has gone about her work all these years, whether tackling big jobs or little ones.

Liz, it is a great pleasure to honor you as the recipient of The Foster Hannaford Recognition for distinguished and loving service to North Shore Country Day School.