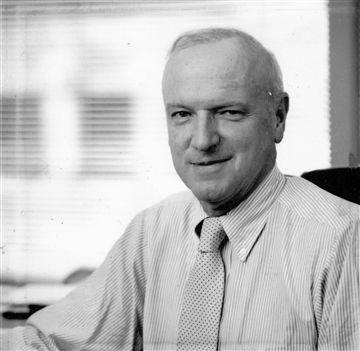 It was breakfast at the Pretty Good Cafe where Jim DeYoung first described the concept of the 21st Century Fund, soon after my appointment as Head of School. He presented the idea of a $1 million fund, raised by trustees to show their faith in the School and allow us to translate our new mission statement from dream to reality.
Having outlasted all four of his sons in time spent at North Shore, Jim has contributed to the School in so many ways—serving on various Board committees, including the 1992-93 Head of School Search Committee, Chair of the Development Committee from 1989-1992, a member of the Steering Committee for the School's $10.5 million Campaign for Tradition & Innovation, and Chairman of the Board from 1995-1999.

Jim has an aptitude for remembering, without a single note, all the crucial points and people to recognize in any meeting. North Shore has come to count on his unique fundraising techniques as well as his—and Penny's—unique outfits at gala Auctions. Most of all, we've counted on his vision for the School and his willingness to do what is needed to see it through.

Fellow Board member Chris Galvin wrote, "I have enjoyed very much working with you, in particular, as well as other trustees on the Renaissance of the North Shore Country Day School. Your ability to sacrifice and give as much time as you did, I admire. Time, in addition to leadership, is our most precious resource, therefore you gave the most."