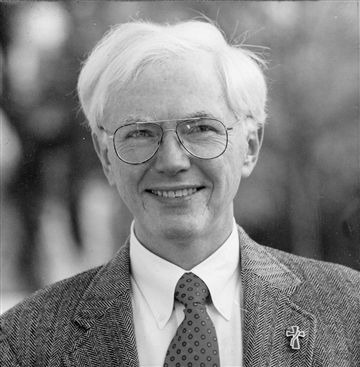 The year was 1975 and you, Dr. Michael Cavanaugh, finding yourself captivated by what you have called "the wonderful sense of community  at North Shore Country Day School, enrolled your oldest daughter in the School's kindergarten. That move launched what you describe as a "25-year love affair" between you and the NSCDS community, as you and your wife, Jean went on to send all four of your children to North Shore.
Today, one quarter of a century later, "lifers" Beth, Liam, and Anne are graduates of 1990, 1997 and 1999, respectively. Your youngest daughter, Tori, will graduate in June 2001.

But your role in our community has extended well beyond that of parent. From 1980 until June of 2000, you were a member of the School's Board of Trustees, serving on virtually all Committees of the Board, and as its Secretary for four years during the mid-1980s. One fellow Board member recently called you "the conscience of the Board," describing you as "an ethical thinker who looks at issues through a lens of reason, a quiet but steady voice who is always willing to listen." In addition to your outstanding service on the Board, you and Jean have supported the School's financial initiatives. You are a generous donor to the Annual Fund, and have been a dependable and effective phonathon volunteer through the years. You were instrumental in the success of the School's recently completed Campaign for Tradition and Innovation.

Dr. Cavanaugh, North Shore Country Day School is a better place today because of you and your family. An Upper School teacher who has known you and your children for many years recently wrote "character, integrity, discipline, dedication, curiosity, and commitment—that has been the Cavanaugh way." So, with appreciation for these qualities and in recognition of the way you have used them to serve North Shore Country Day School so well, we are pleased to honor you as the 2000 recipient of The Foster Hannaford Recognition.

Presented by James W. DeYoung, Board of Trustees
November 30, 2000
Back