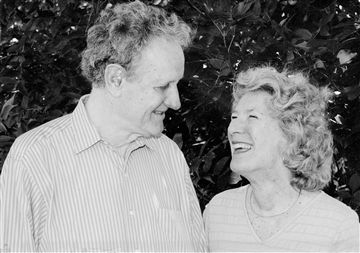 Julie and Parker Hall together have contributed time, perspective, insight and a generous spirit that have sustained North Shore Country Day School. Dedicated, aware, passionate and focused, Julie and Parker hold themselves to very high standards and have delivered on those standards in their efforts for the School.
Julie has served North Shore as English and social studies teacher, Head of Middle School, fifth grade teacher, academic dean, library program director, and Head of School from 1992-2000. Parker, as President of Lincoln Capital Management, provided thoughtful, balanced, intelligent oversight of his company with integrity, while having a significant impact on others—he is always measured, always wise, always respectful as a leader and advisor, and in supporting Julie and other Board members at North Shore. Clearly, they both have accomplished a great deal professionally, but it is also the manner in which they accomplished their work—with dignity and dedication—for which we recognize them.

Using those same qualities to support those institutions they believed in through their combined philanthropic and civic involvements—such as Swarthmore College, University of Chicago, American Secondary Schools for International Students and Teachers (ASSIST), Chicago Shakespeare Theater, Ravinia, to name only a few—they affirmed their commitment to North Shore's educational mission, its students and its teachers. North Shore's Foundation Board Chair, Cam Avery, recalls that "North Shore is one of many institutions that have greatly benefited from not only their generosity but their enormous commitment to making a difference."

Their son, Kerry Hall, recalls his parents' commitment to faculty, so much so that it became one of their missions to increase the School's endowment in support of teacher salaries. Upon the completion of the Campaign for Tradition & Innovation in 2000, the Board of Trustees unanimously approved the designation of The Julie Hall Great Teachers Fund in honor of Julie's devotion to high-caliber faculty. Julie and Parker have made an impact on countless faculty, administrators and staff through their personal relationships, support, acknowledgement and encouragement. They are proud that their three children have followed Julie's career path into education and that two of their grandchildren attend North Shore—Marissa, class of 2010 and Riley, class of 2013

During their long association with North Shore, they have been active participants in development efforts, including three Capital Campaigns. The first Campaign in the '8Os, Endowing Educational Excellence, built The Hall Library, in honor of former Headmaster and friend, Dick Hall. The second, The Campaign for Tradition & Innovation in the '90s, significantly increased the School's endowment, specifically for teachers' salaries. And the recent Campaign, Honoring Our Past, Building Our Future, built the Conant Science Center, renovated Lower and Middle Schools, and increased endowment.

Upon her retirement in 2000, Julie described North Shore in the following way: "The metaphor of the acorn on the School seal seems apropos: Over the years, North Shore has deepened its roots, spread its branches, and is sturdier and stronger than ever. For the present and for the future, this special school has so much to offer, not only to its own students, but also to others who can gain from the example we set as an outstanding educational institution." Julie's commitment, awareness and example, and Parker's insight, partnership and dignity have earned the North Shore community's full respect. Together, their impact on the School cannot be measured.

Presented to Julie and Parker Hall by Jim DeYoung and Tracey Shafroth
October 25, 2006
Back