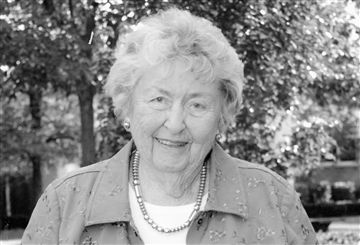 After graduating North Shore in 1937, she attended Smith College and went on to the Winnetka Secretarial School and Institute for Certified Travel Counselors. She and her husband Bill had three children—Debby, Nancy and Bob. She owned a travel agency in Winnetka for many years and has served and contributed on many boards.

Her enthusiasm for North Shore has never waivered. She has maintained connections to classmates as class representative, planning and hosting regional gatherings, providing a forum to foster stronger ties to the School. Her warmth, openness and skill in connecting with people set those gatherings apart, leaving all with a renewed appreciation for North Shore. A lifelong learner and loyal traveler on Alumni trips, she demonstrates a passion for continuous learning.

Her parents' close friendship with the Goodriches, a long-standing North Shore family, led her to North Shore. Her classmate, Mary-Louise Richards Watson, "Mal," fondly recalls Alice as "PeeWee," a name by which she is still referred to by close friends. The North Shore experience has influenced her life, characterized by a willingness and confidence to try anything and everything. Her daughter Debby wrote: "My mother has loved North Shore. She has always said the groundwork for her studies and her learning came to her early, thanks to North Shore." Her curiosity remains at a very high level-always inquisitive, "taking courses and attending lectures. She and her siblings—Nancy Nevins '41 and Bob Graff '40—benefited greatly from the North Shore Country Day School experience."

Mrs. Childs has reflected: "I believe in North Shore. Everything I have done in my life was because I gained confidence in myself. Our experiences with the annual "opera" gave everyone the chance to participate. I believe in music appreciation." As manager of the Field Hockey team, she valued the results of "practice, practice, practice" and good sportsmanship. Mr. Corcoran, her favorite teacher, influenced her decision to major in American Culture at Smith College.

Her relationships with Heads of School Dick Hall, Julie Hall and Tom Doar over the years underscore her long-lasting commitment and many contributions to the School. It is with our sincere appreciation for her enthusiasm and example, keen intellect, remarkable ability to connect with people across generations, her warmth, directness, perspective and humor that we are pleased to present the 2008 Foster Hannaford Recognition to Alice Graff Childs.