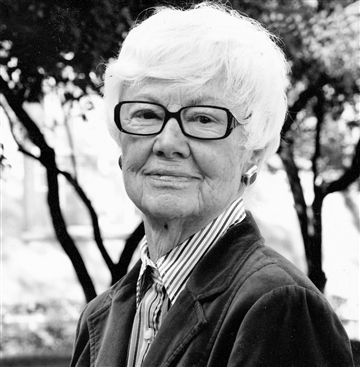 Jane Deuble’s long-term association with North shore Country Day School started in 1963 with her children attending the School’s summer camp program that led to their enrollment as students in the School. The term "lifer" describes students who have been at North Shore from kindergarten through 12th grade, but Jane could be characterized as a "lifer extraordinaire."
Parent of two alumni, Jim class of 1976 and Dan class of 1977; mother-in-law to Amy Deuble, a former faculty member; current grandparent of David class of 2011 and Aleda class of 2012, Jane is committed to and believes in North Shore. Her dedication to this School has never ceased.

Her impact and generosity over 45 years on past, present and future students, faculty, programs, facilities and endowment at North Shore is surpassed by few, including support of Lower School artist-in-residence programs, and input on key issues and school initiatives-never imposing, but thoughtful in recognizing how to enhance learning opportunities and the School. When people see Jane at concerts, plays, athletic games, Grandparents' Day, and many other school occasions they know all is right with North Shore.

Jane immersed herself from the beginning of her children's education at North Shore in many volunteer roles and leadership responsibilities. Her support and efforts have been felt at every level of the North Shore community: Parents' Association volunteer in the classroom, as a lunch-line server, switchboard operator, North Shore House Walk, on the field, co-chair for a decade of the School needlepoint fundraising show, Woman's Board (now the Benefit Board) President from 1974-76 and an Annual Giving and Capital Campaign volunteer. Her generosity as a leadership donor in Annual Giving and Capital Campaigns through the years has made a significant impact on the School. Friend and fellow parent Shirley Gately was her co-chair of the needlepoint show and noted Jane as a "roll up your sleeves" type person who worked in a positive, organized and fun manner. Additionally, Jane's love of art benefited and enhanced the School. One year, Jane and Shirley drove to Wisconsin to meet with an expert on quilts as a potential exhibitor for the show. This special effort yielded a presentation and exhibit on quilts as modem art. Jane's immersion continues to this day—her involvement remains steady, supportive, thoughtful and in tune.

Jane's genuine warmth, humility, positive Raider spirit, and sense of perspective and humor demonstrate to all the great sense of community we value at this School. North Shore spirit shines through Jane in all of her involvement. No task is too small or too large—all is completed with warmth, energy, optimism and always with a smile. She leads her family and all of us in living the School's motto of "Live and Serve."

Presented to Jane Deuble by Head of School Tom Door III
October 22, 2009
Back