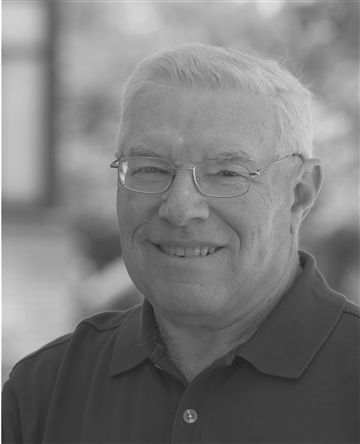 Forty-eight years. Jay’s service to North Shore spans over half of North Shore’s existence. Flexible and responsive. Committed and connected. For Jay, no task is too large, no task is too small. Jay Bach has done it all—with a steadfast focus and a true Raider commitment.
Jay has taught P.E., JK-12, and coached football, basketball, baseball, golf, soccer and volleyball; he even coached one ice hockey game in the late ’60s. He has been part of the Summer Camp for more than 40 years and also has served as Director of Transportation.

Jay coached side-by-side with another one of North Shore’s finest—Mac McCarty. Jay understood Mac; they had a remarkable partnership. This partnership, and Jay’s insight and manner, in many ways, allowed Mac to be Mac. It is ironic and truly fitting that as Jay nears the end of his coaching career at North Shore, he goes out as a two-time State Champion Golf Coach. For those who have played for Jay or worked with him, we know he has truly been a champion since day one.

Jay's first day at North Shore was in September of 1965, shortly after he and his wife Patti were married. Their children were lifers: Tracy, class of 1985 and Bill, class of 1987. Bill now serves as President of the Alumni Board. Patti was active with the Parents’ Association and Woman’s Board, now called the Benefit Board, having served as its President. Not only has the School benefited, and continues to benefit, from Jay’s presence, but from Patti’s, Tracy’s and Bill’s as well.

Clearly, Jay’s investment personally and professionally in North Shore—as parent, coach, teacher, colleague and friend—has been enormous. His impact has been felt in all areas of the School. Jay is warm, friendly, genuine, affable and real. So many like and respect Jay. So many are grateful. The 2003 Mirror was dedicated to him and quoted in that yearbook was Chris Avery '87 who said, "Jay is a difference-maker who makes the places and people he touches better.”

Athletic Director Patrick McHugh has known Jay since 1994, and describes him as "the epitome of the word Gentleman. He is always courteous. Even in situations where a lesser man might struggle to keep his cool. Although an intense competitor, Jay is quite modest. Great communities are built around people like Jay Bach who are the glue that keep us all together."

Jay’s service to the School is valued and appreciated, and serves as an example to us all.

Presented to Jay Bach by Head of School Tom Doar III
October 25, 2012
Back